“We think the distressed opportunity will probably play out in a series of mini cycles over the next 24 to 36 months, so we’ve got a lot of firepower for that.”

Trent Webster, head of strategic investments at the Florida State Board of Administration, which made a series of commitments to distressed funds in the third quarter. 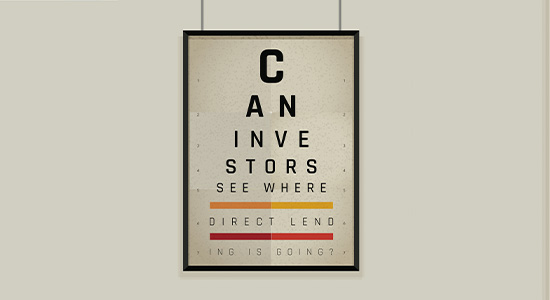 We go direct to the LPs
In trying to assess the future of direct lending, who better to ask than investors from around the globe? That’s precisely what we did for our cover story in the November issue of Private Debt Investor, and the results of those conversations can be found here.

As with many things, there’s good news and bad. The good news is that terms and conditions are moving more in lenders’ favour after many years in which borrowers could effectively dictate market standard. The bad news is that some of the least desirable practices that were carried out in the run-up to the health crisis are now haunting managers – especially in the most troubled industries such as retail, hospitality and travel.

Elsewhere in the issue you can read about how debt fund managers planning for Brexit have found life complicated by covid-19; why asset-based finance may be the next part of the market to take off; and some of the key highlights from our virtual New York Forum. The entire issue may be downloaded here.

Venture debt fights for recognition
One of the big battles for venture debt providers is to avoid being seen as financing of last resort for growth companies. The Runway Venture Debt Review from California-based Runway Growth Capital found that 43 percent of entrepreneurs saw venture debt as a back-up when equity was unavailable.

The argument of Runway and other debt providers is that it should be viewed as a less expensive complement to equity in the capital structure. There appears to be a long way to go for venture debt to catch up with its older cousin, venture equity. The report indicates that, out of $160 billion of venture activity last year, $135 billion was venture capital and $25 billion venture debt.

Default rates? Place your bets
The only certainty about default rate predictions is, it seems, the uncertainty. Earlier this week, S&P Global Ratings published a default rate forecast of 8.0 percent by June next year for the S&P/LSTA Leveraged Loan Index (see here – registration required). However, it cited an “optimistic scenario” of a 2.5 percent default rate, which would represent more or less normal historical levels – while the “pessimistic case” is 9.5 percent.

Any port in a storm. Many believe that infrastructure debt, due to its defensive characteristics, is well placed to weather the covid-19 crisis. Fundraising for the strategy is gradually attracting investor support, despite a couple of down years. See our feature on infrastructure debt here.

The G Unit
Credit ace Bennett Goodman (known for being the ‘G’ in GSO Capital Partners) has launched a firm, Hunter Point Capital, to buy minority interests in mid-market alternative asset managers. Avi Kalichstein (Easterly, JC Flowers & Co, Goldman Sachs) will be chief executive and Goodman will be executive chairman. Michael Arpey, former global head of investor relations at the Carlyle Group, joins as president. Other members of the HPC team include: Rex Chung, the former head of the client and partner group in Asia at KKR; Debra Bricker, ex-CFO at Harvest Partners; and Mariska Richards, currently a partner at law firm Kirkland & Ellis.

The group of financial investors fishing in the pond for mid-market GP interests is growing. Investcorp, Volunteer Park Capital, Stonyrock Partners, Leucadia Asset Management, Rosemont Investment Group and Bonaccord Capital Partners (a unit of Aberdeen Standard Investments) are all either active in the space or moving into it.

Hamilton has 19 years’ experience in client coverage and structuring solutions in alternative credit, most recently as managing director, institutional distribution, at Alcentra. He was previously at Bank of New York Mellon and Thomas Weisel Asset Management.

Hayfin launches latest CLO
Hayfin Capital Management has priced Hayfin Emerald CLO V, a €345.6 million collateralised loan obligation. The transaction is one of Europe’s largest CLO issuances since the outbreak of the covid-19 pandemic and the second European CLO Hayfin has priced since July, following the issuance of the €343 million Emerald CLO IV. Hayfin is one of the few managers to have come out with multiple European CLOs since the beginning of the pandemic.

Shinhan’s recent private debt commitments have been made to funds that focus on mezzanine debt strategies across North America.

Oklahoma Teachers’ Retirement System backed a fund from Starwood Capital Group at its October 2020 meeting, according to an investment committee meeting document.