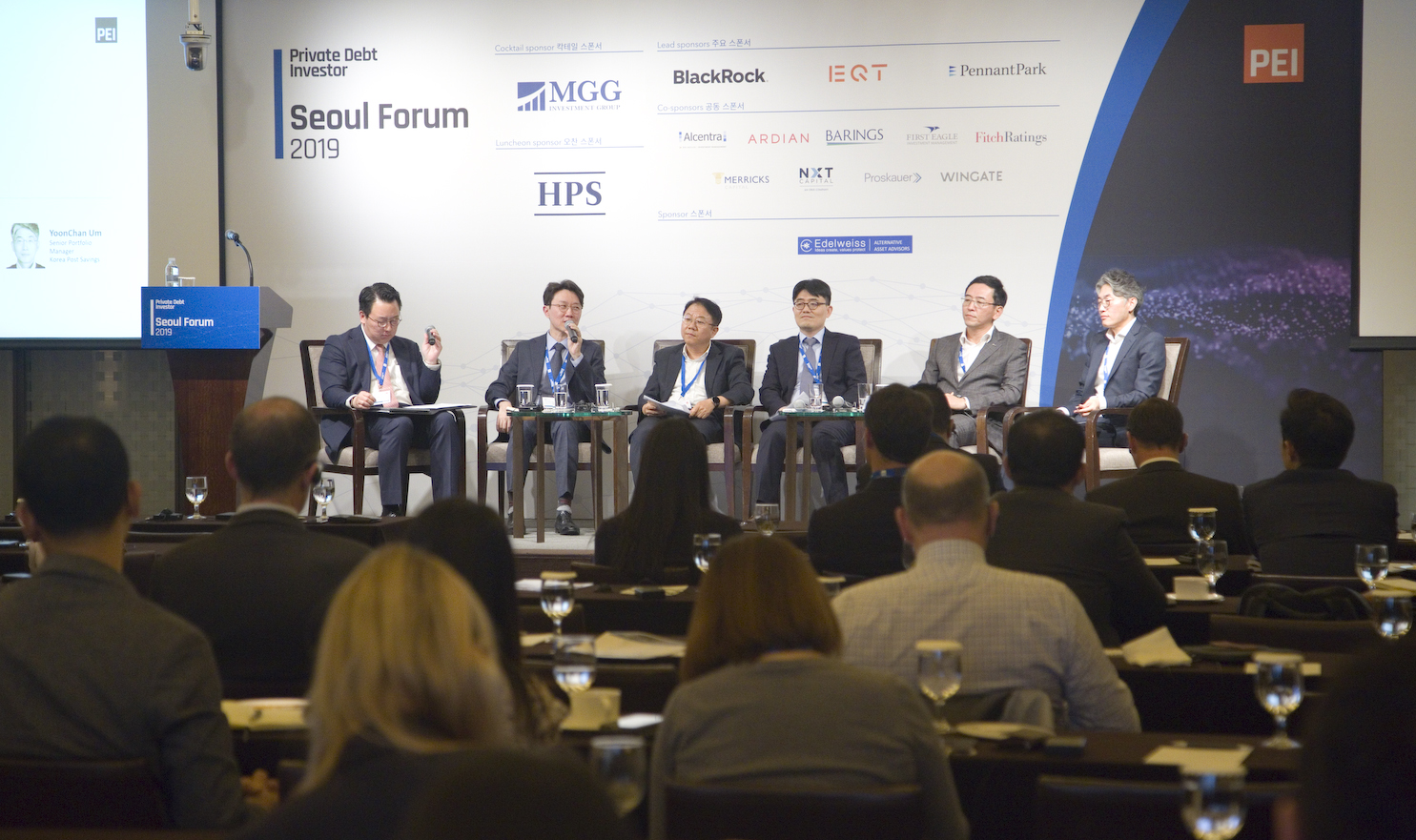 Five Korean investors gathered at PDI’s 2019 Seoul Forum to discuss their perspectives on private debt, tipped to be the asset class where they will keep deploying capital amid low yields in the traditional fixed income landscape.

For insurance groups, capital deployment into alternative assets has been complicated by risk-based capital charges outlined by the local regulator, the Financial Supervisory Service. Some insurers in Korea are under pressure to generate profits amid the low base rate environment, despite negative spreads between deteriorating return rates from investments and promised fixed returns on products they sold.

All five panellists from KDB Life Insurance, Hyundai Marine & Fire Insurance, Meritz Insurance, Shinhan Life Insurance, and Korea Post confirmed that they are either maintaining their current exposure to private debt or plan to increase it further for 2020.

Still, two of the five investors mentioned that they have concerns about corporate borrowing practices in the US, including EBITDA adjustments devised by private equity sponsors when underwriting based on the projected cash flows of investee companies.

Here’s a brief summary of the thoughts of all five:

Lee added that the private debt asset class has been generating favourable risk-adjusted returns for his portfolio. When asked about the constraints that Korean life insurance companies have when deploying capital into alternatives, he pointed out the increased risk burden on some assets. Because of that, his team has been securitising part of the underlying credit instruments in a GP’s fund to mitigate the risk charges to a degree.

“Generally, life insurers have long-dated liability durations. In our case, we are looking at a long-term investment horizon of more than 10 years. Although private loans typically have durations of five years, we can get compensated by higher returns from the strategy to make up the drawback in the duration terms, compared to our longer-term investment horizon,” Lee said.

According to Woo Suk-Moon, head of the investment banking division at Shinhan Life Insurance, his team had been focusing on asset-backed lending such as real estate debt post-GFC, but has been refocusing on large-cap corporate lending across North America and Europe as well as mid-cap private lending opportunities.

Shinhan Life’s financial holdings group, Shinhan Financial Group, acquired a 59.15 percent stake in Orange Life, formerly known as ING Life Insurance, as of January 1 2019. Additionally, the group reportedly plans to acquire the rest of the investee company’s stake, about 41 percent, to merge it with Shinhan Life. On finalisation of the merger, Shinhan Life’s AUM will grow to up to 60 trillion Korean won.

Woo told the audience during the panel discussion that his team is ramping up its sourcing ability in Europe and plans to increase its exposure to corporate financing opportunities in the US, including structured products, as the investible assets will grow significantly upon completion of the merger.

Kwon Yong-Gwan, head of the private equity team at Hyundai Marine & Fire Insurance, who also oversees the firm’s investments in acquisition financing and private debt funds, said that their commitment size has been between $30 million and $50 million. His team has exposures to direct lending and mezzanine debt via separately managed accounts across North America and Europe.

Notably, he said that his team does not prefer maiden credit funds from managers that are traditionally known as private equity houses. “We prefer the [sub-set of private debt] strategy where managers are known for their expertise and long track records,” Kwon added.

Yang Jung Yong, head of the asset management department at Meritz Insurance, runs the firm’s investments in acquisition financing deals and private corporate debt strategies. He said his team plans to increase its private debt exposure to grasp the illiquidity premium, considering this the late credit cycle as he observes a slowdown in the manufacturing sector and a decrease in the consumption level that he considers signals of an economic downtown.

“Although a senior secured lending strategy can maintain enough equity cushions, we are taking a conservative approach to private debt as credit risk can potentially increase due to an increase in debt burden and a decrease in EBITDAs (corporate earnings level),” Yang added.

Um Yoonchan, a Seoul-based portfolio manager of Korea Post Savings Bureau, who is responsible for overseas private equity and private debt investments at the organisation, confirmed during the panel discussion that his team has existing exposures to senior loans, mezzanine debt, special situations, and distressed debt investments.

Given the investment environment, his team looks for GPs’ ability to generate stable cashflows on a yearly basis. However, Um also pointed out that rosy valuations from private equity houses and EBITDA adjustments reflect the credit market status.

“It is a borrowers’ market,” he noted, adding that “what we saw in the credit market for the last 10 years and what we are going to see in the next 10 years will be completely different,” Um noted.