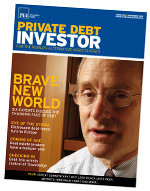 Back to Print Editions

Partners Group raises debut credit fund 2013-01-01 Partners Group has raised its first dedicated investment vehicle to provide debt financing to mid-market companies. The firm has been investing in private debt since 1999, but has never had a fund dedicated to the strategy. The €375 million P

3i moves into US debt markets

3i moves into US debt markets 2013-01-01 UK-listed 3i Group, fresh from the acquisition of seven CLO contracts worth €2 billion from Invesco in May, made its first foray into the US debt markets, signing a joint venture with US-based WCAS Fraser Sullivan Investment Management which gives it a

Carlyle raises $1.4bn for energy credit 2013-01-01 The Carlyle Group has garnered $1.38 billion for its Carlyle Energy Mezzanine Opportunities Fund, which will invest in projects and companies in the energy sector. Target investments will be in the range of $20million to $150 million. The fin

Torchlight raises $300m for debt fund 2013-01-01 Torchlight Investors has collected $300 million for the first closing of its latest real estate debt fund, Torchlight Debt Opportunity Fund IV, according to sources. The firm, which is seeking to raise $1 billion, secured commitments from seven

Project finance: Dutch road cracks funding puzzle 2013-01-01 The forthcoming N33 road project in the Netherlands will source 70 percent of its debt via an inflation-linked loan from Dutch pension provider APG. The ‘bank-to-pension’ funding solution is the first of its kind. The N33 desig

Eye of the storm

Distressed debt funds are attracting a lot of capital at the moment. But with banks apparently in denial about the extent of their problems, deals remain thin on the ground, writes Oliver Smiddy

Despite a number of challenges to the European debt markets, there are plenty of reasons to be cheerful, according to Matthew Sabben-Clare

Debt and the LP evolution

In the wake of a funding gap created by the retreat of traditional lenders, institutional investors are flocking to real estate debt strategies. Evelyn Lee charts the evolution of this discreet opportunity and assesses the debate over separate accounts versus funds

Banks are being pulled in different directions by politicians and regulators, debt needs to be refinanced, and the macroeconomic picture is uncertain at best. But these challenges have led to a return to basics – relationships, analysis, circumspection, flexibility – and have provided private debt funds with a significant opportunity. Six of the industry’s leading lights gathered in London in October for Private Debt Investor’s inaugural roundtable to discuss that opportunity. Oliver Smiddy reports.

In the first of our series of features examining significant debt deals, we examine how Goldman Sachs and a pair of US hedge funds wrested control of UK hotel chain Travelodge from equity holder Dubai International Capital. Oliver Smiddy reports

An uncomfortable compromise between unfamiliar bedfellows

Traditional lenders and newer providers of debt financing are uneasy partners, argues SJBerwin partner Ian Borman, with many difficult issues yet to be thrashed out.

Investors who have some appetite for illiquidity and are looking for attractive risk-adjusted returns should look no further than an investment into private debt – particularly in Europe – argues Sanjay Mistry, Director of Private Debt at Mercer

Loan to own Why Leon Black likes India

Buying up Indian corporate debt is a more attractive option than equity, which is one reason Apollo Management has singled the country out for special attention amongst the BRICs, writes Philip Borel

With real estate financing in Europe still difficult to come by, one of America’s biggest commercial real estate lenders is ramping up in the region, pointing the way for its fellow US banks, writes Robin Marriott

Having made four investments since September and with an ongoing fundraising process to manage, it’s been a busy first 18 months of existence for private debt fund manager Metric Capital Partners, writes Oliver Smiddy

With 2012 coming to an end, it is looking likely that it will be remembered as the year the infrastructure debt market truly took off, writes Bruno Alves