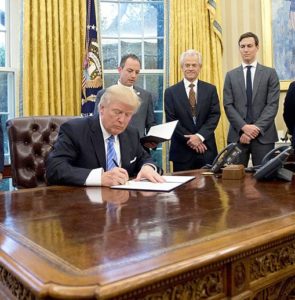 Even as most US businesses hailed two key initiatives of President Donald Trump’s administration corporate tax relief and deregulation the private debt industry watched with some Much of that concern is more about the indirect impact on private debt funds than the direct impact. For example, private equity funds – which sponsor most private debt deals will see a cap on the deductibility of interest payments under the tax That deduction is important to PE firms when structuring deals.Any cap on interest payment deductions could reduce the appetite for debt financing among PE managers. This in turn could put a damper on private debt dealflow.

The emphasis on financial deregulation also suggests a roll back of rules enacted after the economic collapse. These restrictions caused banks to retreat from riskier business loans, providing an open- ing for private debt funds. Could banks now be encouraged to return to business lending, creating much more competition for private debt?

One development was an announce- ment in January by DellTechnologies that it would explore going public again. Dell went private in 2013 in a deal financed with a hefty dose of debt. One of the main stated reasons for exploring a return to the public markets is to raise equity and reduce the debt load. Company CEO Michael Dell wrote an op-ed in December in which he decried the stingy write-offs for loan interest.

“Dell was a large loan issuer,” says John Nagykery, senior vice-president of structured products at Morningstar Credit Ratings. “If a lot of companies start think- ing like Dell, it could have an impact.”

But the tax bill also hands out generous corporate tax cuts that could be enough to offset the loss of interest rate deductions. And there may be other benefits from the business-friendly tax bill.

As several observers pointed out, tax rules are the playground of very clever accountants and lawyers who are now searching ways to optimise the bottom line effects on businesses and their borrowing practices.

Similarly, legal and accounting experts have been closely monitoring the administration’s positions on financial deregula- tion.While there has been little movement toward overturning the Dodd-Frank Act enacted following the financial meltdown, there has been some chipping away at the law’s application and enforcement.

One of the most powerful agencies created by Dodd-Frank was the Consumer Financial Protection Bureau, an autonomous agency charged with pro- tecting consumer interests in banking and finance.TheTrump administration has sought to reign in the CFPB by limiting enforcement.

In a January report on the new mission of the CFPB, Mick Mulvaney, director of the Office of Management and Budget, wrote: “If there is one way to summarise the strategic changes occurring at the bureau, it is this: we have committed to fulfil the bureau’s statutory responsibili- ties, but go no further.”

That mission statement sums up the administration’s less-is-more view on financial regulation. The CFPB may be the first high-profile arena where that approach is being tested, but it is far from the only area of financial regulation that could see relaxed enforcement and oversight.

Carrying forward the relaxed enforce- ment theme to banks could be a concern for private debt managers. Banks were saddled with a host of new regulations following Dodd-Frank. If enforcement loosens, banks could be freed to jump back into more business lending, including the important middle-market lending field.

“There is definitely an opportunity for banks if regulation is rolled back,” Nagykery says.

The idea deregulation could unleash banks on the private debt market hinges on the notion that banks once played a much more important role in mid-market lending. But in a recent paper, Tod Trabocco, managing director of the credit investment group at

Cambridge Associates, argues there never really was a widespread retreat by banks from financing PE deals. Instead, he credited the rise of private debt financing to innovations by private debt managers that were appealing to mid-market borrowers, including unitranche loans.

“The data quite clearly demonstrate that Dodd-Frank really had no impact on bank lending,” Trabocco says. “If banks were completely unconstrained, would they want to do this lending to the extent that direct lenders do? I don’t think so. The risk culture you see in banks is different from what you see in direct lending.”

But numerous barriers to entry remain that could make such a move difficult for banks, which now lack the expertise and connections that private debt funds have in the mid-market. Banks are still risk-averse entities, so even if they were provided an opportunity to expand lend- ing, their interest would probably be in working with the strongest companies and providing loans at the top of the capital structure.

Even so, successful private debt funds now have the luxury of taking just the top 3-5 percent of deals they review. If banks start competing for those loans, debt funds might be forced to cast a wider net and potentially loosen underwriting standards. Christopher Acito, founder and CEO of credit investor Gapstow Capital Partners, points out that theTrump administration has been more inclined to help small and mid-size banks than large banks when it comes to regulation. Indeed, Treasury Secretary Steven Mnuchin has focused on community banks and credit unions as top-of-the-list institutions needing regulatory relief, prompting moves toward easing some regulatory requirements on community banks.

Acito says that while looser restrictions on community and regional banks could provide a window for them to enter lend- ing fields dominated by private debt, he doubts those banks would opt to do so. Community banks may be smaller, but they share similar aversions to risk that big banks hold, and their expertise and capability is in much smaller loans than those sought by PE firms.

What could happen, Acito says, is smaller banks might be encouraged to expand lending in their specific areas of expertise. For example, a community bank holding 20 percent of its loan portfolio in commercial real estate might edge up to 30 percent. In some cases, smaller banks could find themselves competing with private debt lenders, but the overlap would likely be quite small.

While much of the regulatory focus has been on theTrump administration, a court ruling could become one of the more sig- nificant regulatory rollbacks.

In February, the US Court of Appeals for the District of Columbia ruled that CLOs should be exempt from Dodd- Frank risk retention rules that require the firms to retain at least a 5 percent stake to align manager interests with those of their investors.

But moves to roll back banking regulations could pose challenges to those managers, as could the tax bill’s reduction in interest deductions.