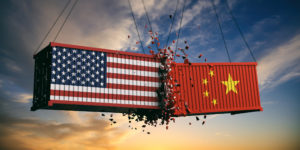 Corporate debt levels could exacerbate the impact of a global trade war between China and the US, according to a report by credit insurer Atradius.

The firm said while debt levels were not likely to trigger an economic crisis, as they did in 2008, they could make the fallout of a trade-related downturn worse and deepen the next recession.

US private sector debt has stabilised at 148 percent of gross domestic product since 2016, but with differing trends between households, which have been deleveraging, and corporate debt which has expanded significantly. Non-financial corporate debt in the US now stands at 74 percent of GDP, historically high and above the peak seen before the global financial crisis.

The composition of that debt is also higher risk, according to Atradius, with more lower-rated investment grade bonds, high-yield debt and leveraged loans.

“The share of these riskier forms of debt is now close to 30 percent of total US corporate debt,” the report said. “Moreover, the firms that experienced the highest increases in their debt loads have higher leverage, higher interest burdens and lower cash holdings compared to the average.”

Leveraged loans have been the fastest growing component of US corporate debt, rising 20 percent in 2018, according to figures from the Federal Reserve, and have increased by an average of 16 percent each year for the past 20 years. The result is leveraged loans now make up 7 percent of all corporate debt in the US.

“Falling profits will make funding more difficult and raise corporate debt distress, resulting in higher layoffs and a cut back in investments. That will deepen the economic downturn once it occurs,” the report said.

“Moreover, despite the Federal Reserve moving towards an interest rate cut, yields for corporates with poorer credit quality have gone up. This effectively makes access to funding for highly leveraged firms more difficult. Even with an expansionary Fed, corporate distress may still rise due to the poorer credit quality in some segments of the corporate sector.”

Utilities and real estate are said to be the most vulnerable sectors with debt to cash ratios of 30x and 16x respectively, but other areas such as beverages, tobacco, building and construction are also highly exposed, according to Atradius.