After a two-decade reprieve, inflation is returning to the US economy, with consumer prices creeping up more than 4 percent between April 2020 and April 2021, the biggest uptick since September 2008.

Historically, real estate has outperformed other asset classes during periods of inflation. It has even benefitted from it, with asset values and leases climbing alongside index prices. However, given the unique circumstances of the current economic environment, not all are convinced the past is indicative of the future. This time around, the Federal Reserve has pledged to keep interest rates low, even as $5 trillion of federal stimulus works its way through the economy.

Energy costs rose 25 percent year over year and commodities 4.4 percent, according to the US Bureau of Labor Statistics. Where inflation has hit real estate hardest is in lumber prices, which are up 400 percent from a year ago. Steel and other building materials are also on the rise too, along with labor costs.

Sam Isaacson, president of Denver-based Walker & Dunlop Investment Partners, expects these costs to come down once more people can safely return to work and global supply chains are either restored or reimagined. However, he worries about the structural risk of drastically increasing the money supply.

“There is a scenario where this thing gets really ugly, really quickly,” Isaacson told PERE. “We are in uncharted territory in that a third of the money supply has been printed in the past year and that presents a real risk to the long-term stability of the US economy.”

Steven Cornet, head of US research and strategy for BlackRock Real Assets, says investors are confident in the economic rally after the pandemic-induced downturn of 2020. But some worry about things bouncing back too quickly. “The number one question from investors is are we going to overheat?” he tells PERE. “What was a 10-year recovery last time will be a two-year recovery this time. It’s truly the fastest cycle ever, so the narrative for inflation is there. But not all inflation is equal.” 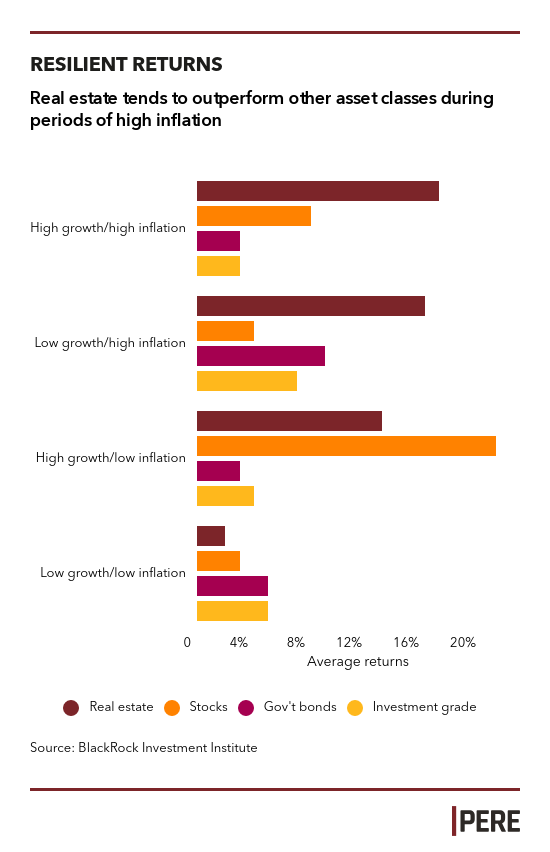 Echoing the Federal Reserve, Cornet sees inflation being transitory, driving up prices for certain stocks and sectors before eventually settling back into normal territory. For real estate, he sees multifamily, with its year-to-year leases, being best suited to capture pricing increases, while some long-term leases for other property types with rents linked to the consumer price index will also absorb the blow.

Justin Curlow, global head of research and strategy for the French asset manager AXA IM Alts Real Assets, says pandemics on their own are not typically inflationary events, as wars have been. Also, he notes that rising material costs and land values serve as a hedge against oversupply – a greater concern in the real estate sector than inflation – and bolster existing property investments by increasing replacement costs.

“From a real estate underwriting perspective, where we’re looking at a much longer-term investment horizon, we’re a little more comfortable than some of the headlines out there,” Curlow said. “We think this inflation is transitory and therefore not something to be overly concerned about.”