“The Omicron variant will be a negative force in the short run, exacerbating supply chain disruptions and aggravating inflation. Within a few months, however, Omicron is likely to be a positive force if it remains as mild as we have seen thus far.”

Part of a commentary on likely trends in 2022 from Kristina Hooper, chief global market strategist at Invesco. 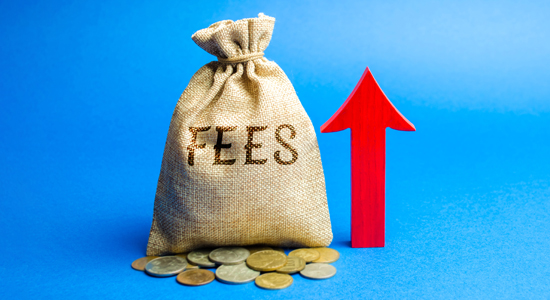 New year, new peak for fees
Direct lending fees are on the rise according to a new study from Cliffwater (registration required), the US investment advisory firm and fund manager. The research, based on findings from 49 direct lending managers with a combined $541 billion in assets, reveals that fees now average 3.14 percent of net assets, up from 3 percent a year ago.

The new average rate represents 26 percent of the 12.01 percent average gross-of-fees portfolio return assumption, including leverage, up from 24 percent a year ago. Cliffwater attributes the upward drift to a few managers increasing fees, some new entrants with higher fee rates and increased administrative expenses.

Clliffwater found considerable divergence between managers, with fees as a percentage of net assets ranging from 2.22 percent to 4.15 percent. Lower fees were generally associated with providers of first-lien loans while higher fees were charged by those undertaking lower mid-market and non-sponsored deals.

The survey found that all 49 managers charged management fees on invested assets only, a significant difference with private equity where fees are typically also charged on committed capital. Reasons for this include direct lending’s legacy practices, more robust dealflow, shorter investment periods and a shorter deal life.

Direct lenders also have a tendency to charge fees based on gross assets (71 percent of the managers in the survey) rather than net assets. Cliffwater says charging on gross assets is unusual for investment firms outside of direct lending, some forms of structured finance and some real estate structures.

Private debt tipped for growth
Private debt looks well placed as we head into the new year, according to the 2022 Private Markets Outlook from asset manager BlackRock. As one of the “mega-trends at work in private markets”, the report says:

“We see opportunities for private credit as economic activity fluctuates amid the restart and covid-sensitive sectors seek additional capital. Private credit AUM is expected to grow 11 percent per year to $1.46 trillion in 2025.”

Healthcare, technology, decarbonisation and the rise of Asia-Pacific are other growing themes identified by BlackRock in the report.

Ecobank, EIB team up for Africa
Ecobank Group, the pan-African banking group, has signed an agreement for a €100 million long-term credit facility over nine years with the European Investment Bank. The facility allows joint Ecobank Group and EIB support for business investments across Africa, with particular support for sectors most impacted by the covid pandemic.

The facility is split into three regional facilities: West and Central Africa, Eastern Africa, and Southern Africa. Funding will be provided through Ecobank affiliates for investment projects undertaken by private sector companies. The EIB made the facility available through its COVID-19 Rapid Response Facility, for private sector entities active in eligible sectors with fewer than 3,000 employees.

Naughton, who has more than 30 years’ corporate experience, served as chief people officer and vice-president of people operations at Google from September 2016 to January 2021. Before that, she held a variety of positions at Google since 2006, including vice-president and managing director for Google UK and Ireland.

“Eileen is a highly accomplished executive who brings significant experience in technology and scaling business operations while building and maintaining a strong, diverse and inclusive culture,” said Michael Arougheti, chief executive officer and president of Ares, in a press release.

Ares’ board has now been expanded to 11 members, including five independent directors and one vacancy, which it will seek to fill in 2022. The credit, private equity, real estate and infrastructure asset manager had $282 billion of assets under management as of 30 September 2021.

Blue Owl hires from BlackRock for private wealth
Alternative asset manager Blue Owl Capital has hired BlackRock executive Madeleine Sinclair as a managing director and head of North American distribution, according to a news release. She will focus on expanding the firm’s private wealth management business across the US and Canada.

“We are excited to welcome Madeleine, who brings two decades of sales and management experience in private wealth distribution,” said Derek O’Leary, chief executive officer of Blue Owl Securities, in the release.

Before joining Blue Owl, Sinclair worked for 19 years at BlackRock, recently serving as the head of iShares Canada, where she oversaw institutional and private wealth distribution, product development and capital markets.

New York-based Blue Owl is a global alternative asset manager that deploys private capital across direct lending, GP solutions and real estate strategies for institutional and private wealth clients. The manager, which holds 85 private wealth management platforms, had $82.9 billion in assets under management as of 30 September 2021.

Pennsylvania Public School Employees’ Retirement System has approved $500 million in commitments across three private debt vehicles, according to a press release issued by the organisation.

Intermediate Capital Group launched Fund VIII in May 2021 with a €7 billion target size, and had raised €6 billion for the vehicle as of November 2021. ICG Europe Fund VIII will invest in subordinated debt, senior debt, structured debt and equity in French, Italian, Spanish, UK, DACH, Scandinavian and pan-European upper mid-market companies across a variety of sectors.

Sixth Street launched its fifth-series fund in June 2021 with a $3.5 billion target size. Sixth Street Opportunities V continues the strategy of thematic, control-oriented, actively managed investments with a significant focus on downside protection. The fund has the flexibility to invest across geographies, primarily in North America and Europe.

Bain Capital launched SSA II in March 2021. The fund seeks to generate attractive risk-adjusted returns by capturing value in complex situations and mispriced assets by providing creative solutions to address capital shortfalls across Asia. It adopts an opportunistic strategy that can dynamically pivot between thematic opportunities and geographies across Asia as they become attractive.

Los Angeles City Employees’ Retirement System issued a request for proposal for a private credit consultant at its December board meeting, a contact at the pension confirmed to Private Debt Investor.

The contract is expected to be for three years. The pension’s current consultants, Townsend Group, Wilshire Associates and TorreyCove Capital Partners, have been encouraged to bid on the mandate.