“With covid-19 case numbers dropping, strong government intervention and good progress with the vaccination programme, the outlook for European credit conditions is more positive than it has been for some time.” 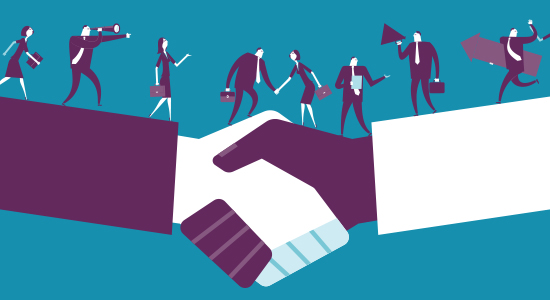 Watch out for a deal frenzy
The first half of last year, when deal activity froze in the headlights of the global pandemic, is becoming a distant memory. With private debt transactions having picked up in the latter stages of 2020, law firm Proskauer’s Private Credit Market Survey is predicting an even more forceful recovery for the year ahead with 85 percent of respondents expecting the deal tally to increase.

Other observations arising from the survey, which reached out to direct lenders managing more than $1.3 trillion in total, include:

No obvious concerns around leverage: At a time when some market observers are citing over-leverage as one reason why they believe there will be a distressed wave next year or the year after, such fears are not reflected in the survey. More than half (57 percent) said they would underwrite leverage at 6.5x or greater.

Fundraising picking up: Eighty-seven percent of lenders said they were currently raising a debt fund, an 11 percent increase over last year. Ninety percent said they have plans to fundraise, a similar figure to 12 months ago.

Terms still weighted in favour of borrowers: Initial hopes that a more challenging environment might translate to better deal terms for lenders appear to have been dashed. Nearly three-quarters (72 percent) of US respondents to the survey expected deals to be more borrower-friendly in the year ahead, compared with 6 percent predicting a lender-friendly deal market.

Covenants are not dead: They might be in the leveraged loan market (more or less), but in the mainstream private debt market covenants are hanging on. Nearly half of US respondents (46 percent) said they would not do deals without a covenant.

Bridgepoint’s listing
Bridgepoint, owner of Private Debt Investor publisher PEI Media, wants to go public. The London-headquartered firm, which has private equity and private credit strategies, said on Tuesday it intends to raise £300 million ($415 million; €349 million) by issuing new shares on the London Stock Exchange, which it will use in part to expand existing strategies and launch new ones. We’ve trawled the IPO documents so you don’t have to – here are some key takeaways.

Private debt’s women of influence
The private debt professionals in this year’s Women of Influence in Private Markets list have trailblazed a path through this traditionally male-dominated field, and have also taken steps to help other women carve their own careers in private credit. Whether it’s leading on deals, launching new business lines or spearheading fundraising efforts, these 10 women are making their mark in the industry.

BNP swoops on SMEs with new partnership
London-based finance platform Swoop Funding has announced a partnership with BNP Paribas Asset Management that will enable it to offer unsecured loans of up to £5 million to SMEs.

Swoop aims to fill a gap in the market for SMEs that need to secure debt funding to support growth without having to provide collateral. Its products include traditional sources of funding such as debt and equity, alternative sources like invoice and asset finance, and business grants.

The loans will form part of BNPP AM’s SME alternative financing direct lending activity, which enables SMEs to access long-term unsecured funding in the UK, the Netherlands and Germany.

Modarresi, who will focus on investments in the technology sector, will be based in Runway’s Silicon Valley office and report to Mark Donnelly, managing director and head of origination. She joins Runway from Lodestar Ventures, an early-stage venture fund she founded to invest in technology companies that create lifestyle efficiencies.

Kartesia notches Dutch deal
A couple of firsts for pan-European fund manager Kartesia. The firm today announced the first deal from its Senior Opportunities I fund with a €50 million unitranche loan to HPI Group, a producer of plastic products based in the Netherlands.

Kartesia also released its inaugural online Sustainability Report for 2021, detailing how it incorporates sustainability into its corporate loans and collateralised loan obligation investments.

The commitments include $150 million to GoldenTree Distressed Fund IV. The pension also formed Pathway/TCRS Strategic Lending Co-Investment, which is a co-investment with Pathway Capital Management with an initial commitment of $250 million and a maximum of $500 million.

The pension’s recent private debt commitments have been primarily to global vehicles focused on the corporate sector.