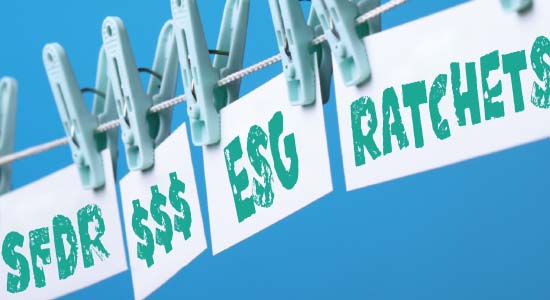 These loans have now firmly taken root in the broadly syndicated loan market and, thus far, have only been seen sporadically in the private debt market. Nonetheless, limited partners are starting to raise their expectations around SLLs, and even smaller managers will ultimately have to live up to them – despite the level of resourcing required being a tough ask on a limited budget.

The SLLs seen so far in private debt have tended not to venture beyond the basic approach whereby rate repayments are reduced when certain ESG-related targets are successfully hit. There is some consideration being given, however, to the linking of key performance indicators to covenants – with a failure to meet targets possibly resulting in covenant breaches. It’s an interesting idea but not yet widely embraced.

One of the more engaging discussions is around whether to write the sustainability aspect into deals pre- or post-completion. The argument for post-deal completion arises from the level of competition and the need for speed of execution – more convenient by far to do the deal today and worry about some of the details tomorrow. The argument against is that the risk of ‘greenwashing’ hovers over such transactions, with a danger that certain promises pre-deal are not kept post-deal. It’s a situation that demands strong borrower/lender engagement.

Above all, the key for the future success of SLLs is how credible they are perceived to be. Some in the market told us that a number of these loans have only a superficial veneer of sustainability, with the social aspect of ESG often overlooked and action on climate change something of an afterthought. In the cover story, we consider the role of regulation and whether the Sustainable Finance Disclosure Regulation can help to frame what is a sustainable loan and what isn’t.

Worry about leverage, not default rates
The “t” word – transition – is the focus of Oaktree Capital Management’s latest Performing Credit Quarterly. The word represents “a new phase in which businesses, consumers and investors will have far less government support”. Oaktree notes a weakening in prices in many asset classes during recent weeks and says it’s “unclear whether markets can regain their momentum when the government no longer has its foot on the gas”.

The Quarterly includes a number of observations about credit markets on the cusp of this new reality. Default rates, it says, are expected to remain at low levels. The report points out that many firms took advantage of favourable conditions last year to refinance debt at longer maturities and lower interest rates. “With few major debt maturities in 2022, there is less opportunity for companies to default.”

It has a warning about leverage, however, in a period when interest rates are likely to rise. “A company’s capital structure may look manageable when the economy is growing at a fast rate and earnings are strong, but this same company’s leverage… may look far less manageable if a slowing economy causes the company’s fundamentals to decline meaningfully.”

On an encouraging note, the report says that investors are likely to continue favouring floating-rate over fixed-rate assets. It speculates that if interest rates continue to rise, floating-rate assets including loans, collateralised loan obligations and real estate-backed structured credit may perform well.

HPS launches first BDC with $1.2bn of capital
HPS Investment Partners, the sixth-largest fundraiser in private debt according to the PDI 100, has launched its first business development company. HPS Corporate Lending Fund, a non-traded BDC, has $500 million in net equity proceeds and $1.2 billion in investable capital including leverage.

The fund aims to provide a stable monthly income stream by investing mainly in senior secured, floating-rate loans to mid- and upper-mid market companies. The BDC has already made funded and unfunded commitments worth more than $660 million.

Debt secondaries up 300%
The latest secondaries volume report from Toronto-based investment bank Setter Capital shows there was a marked rise in debt fund secondaries last year. The total rose to $2.5 billion compared with $640 million in the year prior, an increase of 300.4 percent.

Setter includes debt as part of the private equity universe alongside leveraged buyouts, venture capital, funds of funds and energy. Despite the rapid rise of debt, it still only accounted for 4 percent of the total in 2021, compared with 76 percent for leveraged buyouts. While no other segment rose as quickly as debt, they all showed material increases last year.

UK SME manager receives £100m funding boost
UK-based SME financing specialist ThinCats has increased its funding power to a total of £650 million ($880 million; €770 million) after signing an agreement that will see £100 million allocated to the firm by Insight Investment, the global asset manager.

Insight had previously committed capital to ThinCats in September 2018, and is part of a group of investors alongside the likes of Barclays and Citi that deploy funds alongside ThinCats’ own capital.

ThinCats supports mid-sized SMEs with loans of between £1 million and £15 million and, since formation, claims to have allowed companies to raise around £1.2 billion.

The public pension made commitments of $20 million each to Brightwood Fund V and Lynstone Special Situations Fund II. As has been commonplace for any CPABF investment, these funds were chosen from a four-fund shortlist derived from an earlier RFP issued by the pension.