“The biggest long-term structural shift we see is from public markets to private markets, which has been gathering steam for over a decade and which I believe will continue.” 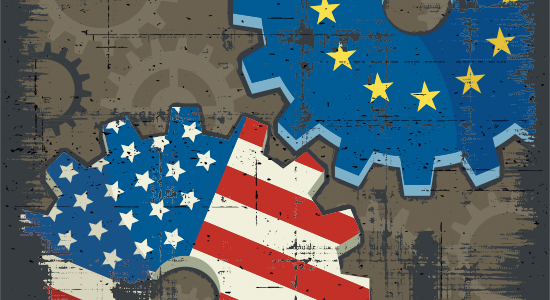 The new world revisits the old
It’s not the first time US managers have gazed over the Atlantic and been tempted by what Europe has to offer – but, with numerous partnerships having been formed over the past year, it’s clear the trend has fresh momentum.

“Conditions are ripe in Europe for the same type of growth” that the US has seen in the past few years, says Ted Koenig, president and chief executive officer of Chicago-based manager Monroe Capital, which in March teamed up with Aberdeen Standard Investments‘ Bonaccord Capital Management, based in Edinburgh.

Blackstone‘s European credit business has doubled its business every two to three years since it began life as GSO Capital Partners in 2006, says its chief, Paulo Eapen, and he expects that trend to continue for the next three to five years. Blackstone Credit in Europe now deploys $5 billion to $6 billion a year, surging from $1 billion to $2 billion a year just five years ago.

Small wonder then that Bain Capital Specialty Finance formed a direct lending joint venture with London-based Pantheon in February, and that in December, CANDRIAM and its New York Life Investments Alternatives unit inked a strategic partnership with pan-European firm Kartesia, while Churchill Asset Management, an affiliate of Nuveen, and Paris-based Tikehau Capital agreed to invest in each other’s funds.

In this month’s cover story, you can read all about these partnerships as well as the challenges of launching operations remote from the power base (see here).

Download our July/August issue
In addition to the cover story detailed above, the July/August issue of Private Debt Investor also features our usual wide-ranging analysis, including: the limited partners taking a pan-regional approach to Asia-Pacific; prospects for growth in Spain’s direct lending market; the opportunity for lending to technology businesses; and the structuring issues facing managers ahead of the likely next fundraising wave. Read about all this and more in our download here.

The strategy has various aims including identifying firms best placed to perform through the transition to a low or net zero carbon world; reducing weighted average carbon intensity to at least 30 percent below benchmark; and decarbonising portfolios by 2050 at the latest.

The strategy has the backing of the UK’s National Employment Savings Trust, which has converted its $2 billion allocation with WFAM to the strategy. It is being managed by WFAM’s global fixed income team, headed by Scott Smith and Henrietta Pacquement.

Latest CLO close for AXA IM Alts
AXA IM Alts, the Paris-based alternative investments firm with around €162 billion of assets under management, has closed a $510 million collateralised loan obligation, Allegro CLO XIII. It is AXA IM Alts’ 13th CLO deal in the US and follows the close of Allegro XII in January this year.

Allegro XIII gained support from investors in the US, Europe and Japan. The non-call period for the transaction is two years, with a five-year reinvestment period.

Ares nets Atletico Madrid deal
Ares Management has acquired a 33.96 percent interest in Atlético HoldCo, which owns a 65.98 percent stake in football club Atlético Madrid. Atlético are current champions of the Primera División of Spain’s La Liga, having won its 11th league title in May this year. The deal was reported to be worth around €182 million.

Mark Affolter, partner and co-head of US direct lending at Ares, will join Atlético HoldCo’s board of directors. “Ares is pleased to make this strategic investment in Atlético de Madrid given its international brand equity, loyal fan base and resilience through the covid-19 pandemic,” Affolter and Ares partner Jim Miller said in a joint statement.

Double asset-based finance hire for KKR
KKR has hired Giacomo Picco and Stephanie Yeh as managing directors in the firm’s global private credit team based in New York. The new hires are additions to the firm’s private asset-based finance investment strategy, with Picco leading a new effort focused on receivables and inventory financing and Yeh responsible for co-leading the sourcing of ABF investment opportunities in the US.

Picco was previously portfolio manager and head of alternative lending and capital solutions at Sound Point Capital where he helped build the firm’s alternative lending business. Yeh was head of early-stage financing at Credit Suisse where, as a managing director, she helped launch the group and expanded the bank’s coverage to early-stage clients across asset classes.