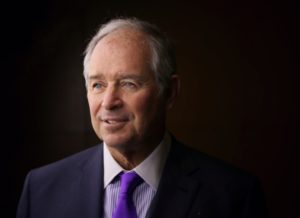 The end result is emblematic of Blackstone chief executive Steve Schwarzman’s credo that he lays out in detail in his new memoir, What It Takes: Lessons in the Pursuit of Excellence.

“I had reached an important conclusion about starting any business: it’s as hard to start and run a small business as it is to start a big one,” he wrote. “So, if you’re going to dedicate your life to a business, which is the only way it will ever work, you should choose one with the potential to be huge.”

Direct lending, globally, has become a key priority for the firm.

“I think direct lending is really interesting, particularly in Europe because the banking system there is significantly undercapitalised,” Schwarzman told Private Debt Investor. “They are still carrying, in some countries, bad loans under quite tight regulatory supervision. Meanwhile, there’s a real economy that wants to be financed.

“So, from our perspective, we can advance monies to those companies on a very conservative basis at very high returns, simply because capital is not adequately available. So that can be a big business and a really good business.”

The firm held a second close on almost €630 million for its second European direct lending fund, GSO European Senior Debt Fund II. Fund I raised almost €2 billion and has posted a 10 percent net internal rate of return and a 1.2x multiple on invested capital, according to the firm’s second-quarter earnings.

Among the large final credit fund closes the firm has held this year, it wrapped up a $4.5 billion energy fund and a $7 billion distressed debt fund, according to PDI data.

GSO, which by year end will have lost the ‘G’, ‘S’ and ‘O’, might not be where it is had Schwarzman not taken Blackstone public in June 2007. The move would yield not only more than $7 billion in proceeds for the private equity firm, but GSO co-founder Bennett Goodman phoned Schwarzman after the firm’s IPO with an offer: let’s merge.

“They said, ‘We looked at your prospectus. Look at how fast you grew, and if we were affiliated with you, we’d be able to take our business’ – which at that point had $6 billion of assets – ‘and we could build it into something much, much bigger as part of Blackstone,’” Schwarzman said.

The offer was hardly a cold call. Schwarzman and Tony James, then Blackstone’s president, had made overtures to GSO. James, formerly of now-defunct investment bank Donaldson, Lufkin & Jenrette, had worked with Goodman and fellow GSO co-founders Tripp Smith and Doug Ostrover.

“We started in the private credit business in 1999. We raised our own mezzanine fund,” Schwarzman said of the $1.1 billion Mezzanine Partners I. It would raise a second fund of a similar size before acquiring GSO. “We were successful with that business, and so we already had a feel for how [the credit] business worked,” he added.

A dozen years later, GSO oversees close to $140 billion across numerous strategies. Though Goodman, Smith and Ostover have either departed or are on their way out, the credit platform they created will live on.

As GSO builds out its new direct lending platform, it, like all other credit managers, has had to contend with almost stratospheric valuations.

“You always worry when prices get higher,” Schwarzman said. “Someone is always justifying a reason to pay more or do something that’s not necessarily the right thing to do. Whether it’s [public market] valuations that are half or less of what private rounds were, sometimes markets simply get ahead of reality. Interest rates are very low, and lots of capital [is] available. It’s more of a warning that you have to be particularly alert right now because of those types of indicators.”

As he built Blackstone, Schwarzman had another maxim: don’t miss a can’t-miss opportunity. In fact, it was what led him to build the firm in the first place.

While a partner at Lehman Brothers, Schwarzman had tried to launch a leveraged buyout fund, but the investment bank’s executive committee resisted. In 1986, the moment had not left, but Schwarzman felt the opportunity could slip away if he and fellow Blackstone founder Pete Peterson hesitated.

“I’m convinced that now is the right moment to raise a [buyout] fund and that moment may never reappear for us. We’ve got to hit it,” Schwarzman told Peterson at the time, according to the new book.

For Schwarzman, the idea of a can’t-miss opportunity is eternal.

“There’s always another one,” he said. “You just don’t know what it’s going to be. I was at one of our group meetings, and they were playing around with an idea, they saw something in the markets. It could be really huge, if it works.”

However, he keeps his cards close to his chest.

“I can’t tell you what exactly will be next,” he said. “If I knew I wouldn’t tell you because there are no patents in finance. People can copy what we do, and now many people have learned that is a good thing to do. We don’t want to give away our secrets prematurely.”