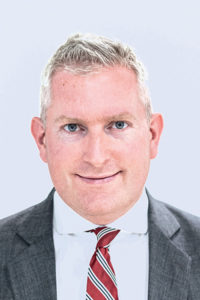 What ambitions did you harbour as a youngster?

I always wanted to be an architect. That a drawing could be manipulated with steel, bricks and wood into an object in which one could live was fascinating. That those buildings could be beautiful and thought-provoking, even more so. Unfortunately, I cannot draw a straight line, so the fascination continues from afar.

How did you eventually find your way into your present career?

I had worked in private equity since university, but noted in the post-GFC period the changing role of banks and the emergence of pension funds and insurance companies as primary debt providers, via managers. The ever-innovative StepStone and, in particular, my colleague and friend of 20-plus years, David Jeffrey, embraced the brave new world of private debt by – bravely – asking me to help build a business.

Initially, that involved actually convincing some that private debt existed as a distinct asset class – PDI was enormously helpful in that regard. As allocations to private markets expanded, and offered alternatives to ‘traditional’ investment portfolios, private debt rapidly became a credible complement to fixed income. We also quickly realised that, in this nascent space, we needed to differentiate ourselves with scale and a long track record, and thus joined forces with Swiss Capital in 2017.

What are the biggest lessons you’ve learned along the way?

There have been lots of lessons and lots of scars! First, good ideas don’t come from the top – leaders serve their teams by clearing paths and exposing those ideas and talent. Second, don’t ever try to be the smartest in the room – try to be the one who learns the most. Third, in the context of a changing, more volatile market environment, I heard someone say the other day (and I am a dreadful golfer): “Someone is always happy with a bad putt.”

What would we typically find John Bohill doing at the weekend, or on holiday?

I might be cycling – it is a sight to behold 100kg of middle-aged, lycra-clad mediocrity dragging itself up a hill. If that hill happens to be in Mallorca, the subject may have taken on a freckled, reddish hue. I would stop along the way at a favourite cafe, ordering a magnificent plate of bread, tomatoes, serrano ham, olives, capers and onions and a robust and reviving cortado coffee. I often find myself thinking about this ambrosial meal in the depths of winter.

Other than that, my favourite thing in the world is swimming with my children and making them pizza afterwards – I may also have a slice, if not two. We have a loud and happy house, where I play the grumbling decibel monitor.

And what’s the one thing we never would have known about you without asking?

I’m completely unremarkable. Someone once described me as “knowing a little bit about everything”. I therefore have an interest in, and try, most things to a degree. This has taken me from childhood, where I would swim, play tennis, rugby, basketball and hurling – an Irish sport of outrageous skill and athletic expression, except when I was playing – to my late teens, when I tried debating (in the Irish language), singing and acting (Uncle Ben in Death of a Salesman, in which I was somewhat appropriately playing a diamond prospector). I don’t think I could ever specialise or be fanatical about anything – life and the people we meet are too rich an experience to deprive myself of what I would be missing.

I therefore travel a lot, try my hand at languages and will do my best to understand cultures and opposing views. Next trip: Dad and me are going to the Rugby World Cup to completely alter the fortunes of a flailing Irish assault on the trophy. Dad has been to Japan before, and I’ve always wanted to go.

Readers may find it interesting to know that I part-own a pub, The Oak, in Dublin (naturally). Do come and visit.