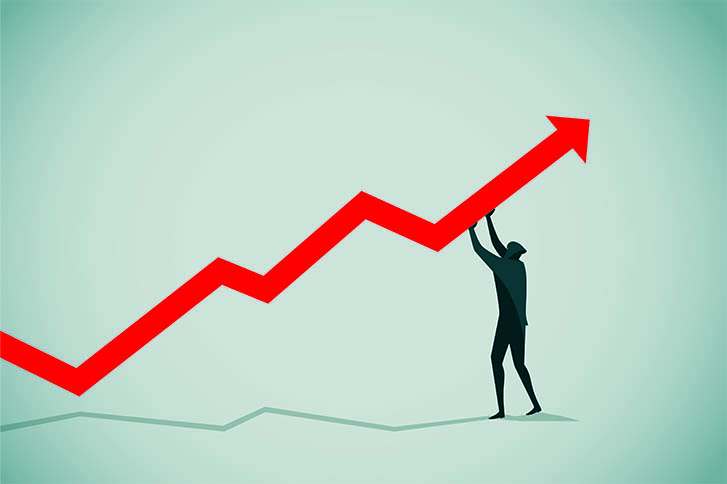 Earnings growth of mid-market private companies in the first two months of the year, compared with the same period a year ago, surged to a record 16.3 percent according to the Golub Capital Altman Index.

“We’ve been seeing a boom building and the boom is here,” says Lawrence Golub, chief executive of Golub Capital, a mid-market lender with more than $35 billion of capital under management. However, he also expresses concerns about inflation.

The results are the latest to compare current conditions with those before the pandemic. As such, Edward Altman, who has been producing the index with Golub since 2013, says the data “likely understates the strength of the first quarter of 2021” because it does not capture the negative impact of the shutdowns last March. Altman, a leading expert and scholar in the credit markets who also advises central banks, is professor emeritus of finance at the NYU Stern School of Business.

The pace of revenue growth of mid-market private companies also picked up, rising by 3.2 percent between the first two months of 2020 and the equivalent period in 2021. Revenue grew by 2.9 percent in the fourth quarter of last year.

Nevertheless, Golub has concerns that fiscal and monetary stimulus in the US are creating “very substantial risks” for the economy and inflation. He notes that “our current fiscal and monetary policy is not logically, quantitatively linked to the observable output gap”. Aggregate demand has been reduced by approximately $300 billion year-on-year because of the pandemic, he says, while the recent fiscal stimulus – which has not yet flowed into the economy – has injected nearly $3 trillion into the economy, nearly 10 times the output gap.

The situation is no better on the monetary side. The path of inflation is uncertain, but Golub says, “Jay Powell and the Fed are speaking as though they have a Pollyannaish vision of risks”. He believes this could be problematic if inflation becomes sustained. He notes that prices of commodities such as copper, wheat and lumber have “skyrocketed” from a year ago, and points to the latest report on consumer prices, which shows the CPI spiked by 0.6 percent in March from the previous month and 2.6 percent from a year previously, thereby exceeding analysts’ estimates.

However, David Rosenberg, founder, president, chief economist and strategist of Rosenberg Research, says the pandemic “has unleashed a prolonged period of noise in the pricing data.” That is why he thinks the Fed is not overreacting, nor does he believe that it should. He also notes that even with the lags from prior dollar weakness and the commodity boom, core goods CPI “only eked out a 0.1 percent gain in March and has shown no net change over the past six months”.

Still, Golub worries that the distortions in the numbers from those who are receiving supplemental jobless benefits, coupled with covid-related anxiety about rejoining the workforce, could create “a lot of pressure on wages”. That, along with potential supply constraints, could present problems.

He sees three possible inflationary scenarios, and believes the risks that one of them will develop are evenly balanced. The first is a temporary burst of inflation that dies down quickly as people return to work. The second is that inflation remains sustained and the Fed, more worried about employment than inflation, continues to keep interest rates low. That would be a set-up for “multi-year, sustained inflation”, he says. The third is that the Fed raises rates earlier than expected and “probably triggers a modest recession”.

Golub says the mid-market index reflects something of a bifurcated economy, with sectors such as travel and entertainment that were more seriously affected by the pandemic still experiencing difficulties.