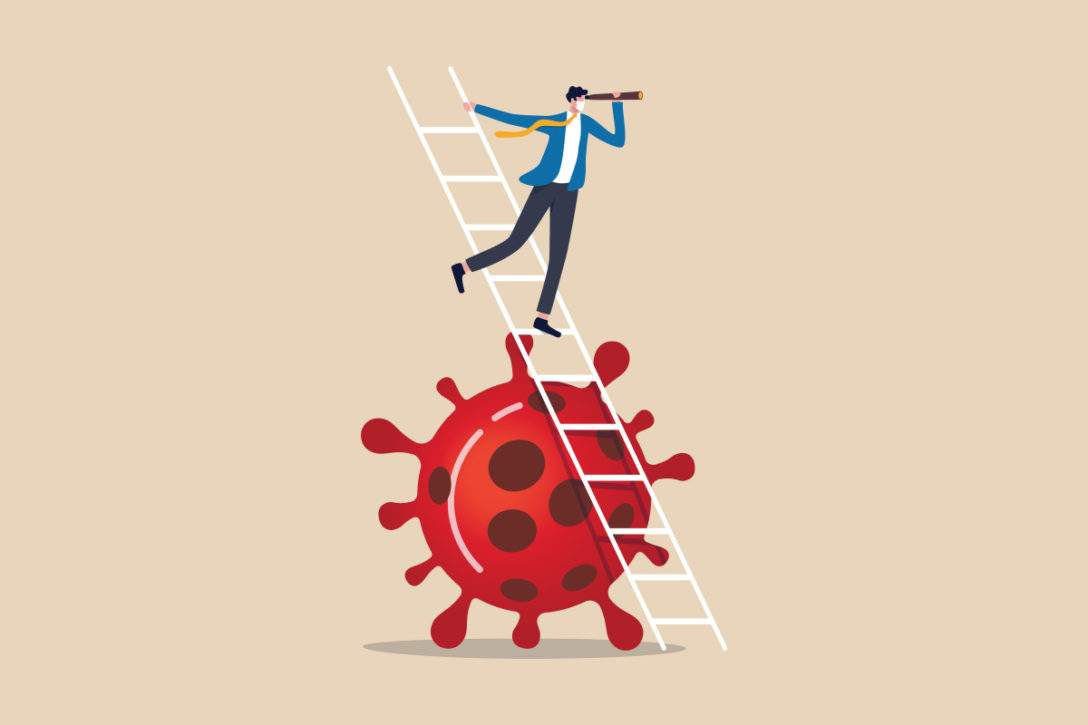 On 23 February 2020, Italy began quarantining small towns in the north of the country that had been hit by a new virus originating in the Chinese city of Wuhan. This would be the first step in a cascade of quarantine measures that would soon spread to almost every part of Europe and into North America as governments struggled to contain the SARS cov-2 coronavirus and the illness it triggers in many of those who contract it: covid-19.

A year on from Europe’s first lockdowns, we spoke to industry professionals to reflect on the impact the crisis has had both on the wider economy and on the private debt asset class.

Shadow of the GFC

More than a decade after the global financial crisis, many investors had been expecting an economic downturn, though the nature of the covid-19 crisis has surprised many. Not only is it quite unlike the GFC; it is also very much unlike any previous economic crisis.

There are, however, some similarities. Symon Drake-Brockman, co-founder and managing partner of pan-European lender Pemberton, says: “We saw massive government support during both crises and systems have been brought in to support markets in a similar way to what we saw during the GFC. It’s a very unusual recession where government balance sheets have taken the pain through a huge increase in government debt rather than consumers and businesses.”

The cost to governments has been enormous and continues to grow. To give an idea of just how much shutting down their economies is costing governments, a BBC report from November said UK public sector net borrowing had so far reached £214.9 billion ($296.7 billion; €243.9 billion) for the current tax year, which ends on 31 March.

To put this in perspective, total net borrowing following the GFC in 2009-10 reached only slightly more than £150 billion. With costs continuing to rise and a similar picture being seen across much of the Western world, covid-19 could be more damaging to government balance sheets than any event since the Second World War.

Another feature this crisis shares with the GFC is that of bank retrenchment, which was a key factor in enabling private debt to develop as an asset class in the years following 2009.

“The current situation is accelerating the drivers of bank retrenchment and the drivers that have seen private debt grow in Europe over the past decade,” says Mark Brenke, head of private debt at Paris-based fund manager Ardian.

Just as the GFC was the event that really kickstarted private debt, particularly in Europe, the current crisis is set to create opportunities for the asset class, according to Tim Metzgen, head of debt advisory at consultancy Alvarez & Marsal. “Private credit contrasts sharply with what’s going on with bank retrenchment,” he explains. “Debt funds are seeing inflows of funding and have lots of appetite to lend.”

Yet, although banks are retrenching, this is unlikely to reach the scale of what was seen during the GFC owing to structural changes in the sector.

“The banks will take some pain,” says Drake-Brockman. “But it’s not going to be anything like as bad as the GFC, as banks are better capitalised and less leveraged than they were.

One reason markets could see further growth in private credit in the coming years is that the asset class has finally achieved something it lacked during the previous 10 years: a full-cycle track record. Although some debt funds were operating prior to the GFC, their scale was small and they had limited appeal to the wider institutional investor base. Particularly in Europe, the asset class has only really managed to develop over the past decade, when market conditions have been relatively benign.

“This crisis has validated direct lending as an asset class,” Drake-Brockman adds. “Private debt in Europe was being held back by a lack of visibility of how it would perform in a recession. We are seeing this translating into investor interest with a lot of investors delving into their portfolio performance and looking to put more money into private debt.”

Brenke agrees that the asset class has proved itself but remains cautious about the risks ahead. “One of the big unknowns for private debt in Europe was it hadn’t been through an economic cycle,” he says. “But so far it is doing well and getting a positive response from LPs. The asset class has performed better than more liquid strategies, but we’re not through the crisis, so it might be a little early to draw conclusions from that.”

Early indications nevertheless suggest that private debt funds have done well through the crisis. Trevor Castledine, senior director of private markets at investor consultancy Bfinance, says: “I have seen some data on manager performance and most investors are expecting private debt to outperform through this crisis. There are very few private credit managers who will return less than they invested, and this asset class is going to show that it’s very robust.”

Castledine also believes this year could be the beginning of a period of strong returns for private credit as a number of factors will contribute to a good environment for managers to provide loans.

“Investors that commit to 2021 vintages will be investing through 2021, 2022 and 2023, but the massive fundraising and lending of 2017 means there’s going to be a need to refinance a lot of that debt through late 2021 and through into 2023,” he explains. “We have also seen a heavy drop-off in private debt fundraising in 2020 and private equity fundraising has outpaced private credit. All these factors mean there is going to be a supply-and-demand imbalance for private debt.”

“There will be consolidation. But it won’t be funds acquiring other funds, but more that the larger, established players with scale will be able to compete more effectively”
Mark Brenke
Ardian

Data from the PDI Fundraising Report 2020 show that private debt fundraising hit a six-year low last year at less than $150 billion, significantly down from over $265 billion when the market peaked in 2017. The supply of funds in private debt has declined significantly and there could be a substantial refinancing wave on the horizon, but are LPs going to have the appetite for the asset class to grasp it? Castledine believes they will.

“Over the last 12 months a lot of investors have clustered in public equity markets, but there is a growing nervousness on the risk-asset side and thoughts that this could be a bubble,” he says. “We’ve seen adjusting down of dividend yields and a huge concentration risk in the major tech stocks. Some investors may want to cash in their gains and look to diversify their sources of returns, and private debt fits that bill quite well with a good return but a much lower risk.”

However, some of the biggest challenges firms will face if they are to realise opportunities will be in originating deals – particularly as travel is likely to be disrupted for some time, making it more complex to invest in those markets in which a firm does not have its own presence.

“Deployment has changed markedly, with a lot more activity in this space taking place virtually,” says Brenke. “But our local teams on the ground in Europe’s regions have continued to be able to deploy capital.

Remote due diligence is a challenge for any investor, though Alvarez & Marsal’s Metzgen thinks it is likely to be a secondary issue for credit funds.

“Remote due diligence has been less of an issue for lenders compared to the equity side and it is that which is causing delays to transactions,” he says. “We are still working on deals that have been in due diligence since 2019. Particularly in situations that are challenging, face-to-face contact can be really important.”

Metzgen is also concerned that while private debt may be well positioned to take advantage of the post-crisis landscape, there are issues managers will need to watch out for. “One of the challenges is a dearth of opportunities with less M&A activity or transactions that are focused around certain sectors that are not affected by covid-19,” he says. “We see more refinancings and less opportunities for new lending.

“Credit funds tend not to have excessive exposure to the sectors worst affected by the crisis, but we are not through the trees yet. Lenders need to understand what will happen when government support starts to recede and firms will face more liquidity pressure, which could result in a crunch in late 2021.”

Metzgen says markets are pricing in a return to normal business by the summer of 2021, but there are some major risks which mean this may not happen. Delayed vaccine rollouts – particularly in the EU, which has been slow off the mark in securing vaccine supplies – or the emergence of new variants of the virus have the potential to cause further prolonged disruption. This could throw off forecasts about future performance not just in covid-affected sectors but more broadly if there is significant economic turmoil.

The crisis is likely to drive further consolidation in the sector, according to Brenke: “There will be consolidation. But it won’t be funds acquiring other funds but more that the larger, established players with scale will be able to compete more effectively. You need the benefits of scale in private debt to have the infrastructure to be able to invest. Those who don’t have that scale are going to struggle.”

This would mark an acceleration of an existing trend. PDI data have shown that the number of funds being raised has shrunk significantly since hitting a high in 2017 but that the amount of capital raised has not fallen to the same extent. This suggests that funds are on average larger than they were before. Covid-19 has shown the value of having a local presence in target markets in order to do business in a crisis, but this is something that comes with being a larger-scale manager.

It will take some time for the full impact of the crisis to unfold. However, it appears private debt was well positioned going into the crisis and the drivers that helped it grow over the previous decade have not changed. Provided managers can avoid any major problems in their pre-covid portfolios, the coming years could be a new golden age of investment for the asset class.