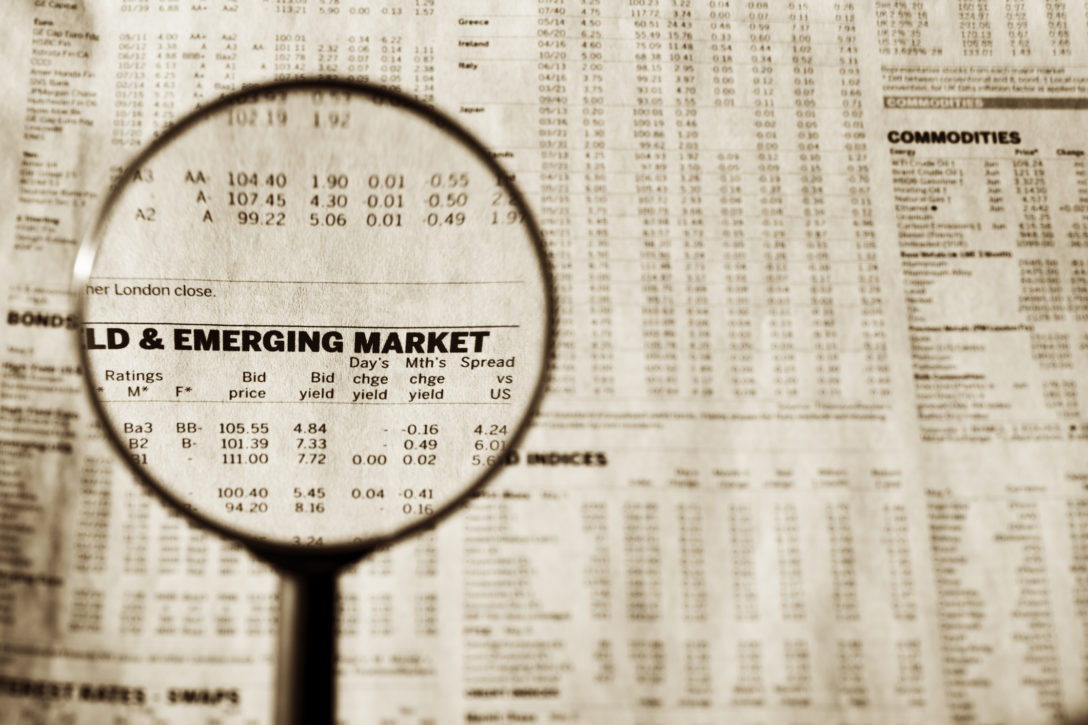 “It feels a bit like 2008 because you have a liquidity issue, but it also feels a bit like 9/11 when there was a sudden stop in the economy,” says Robert Koenigsberger, founder, managing partner and chief investment officer of Gramercy, the emerging markets-focused fund manager. “The difference being, after 9/11 people didn’t really want to go to busy areas. Now they can’t.”

Koenigsberger is reflecting on a period where the pricing of emerging market debt has tumbled 20 percent in a month. As someone who has dedicated his whole career to emerging markets – having worked with banking group Wells Fargo and the Finance Minister of Peru on debt restructurings as far back as the mid-1980s – the current scenario does not put Koenigsberger outside his comfort zone. But he’s also wary of jumping into it too quickly:

“We think there are some interesting opportunities, but we’re cautious because things could get more severe. We want to be disciplined and start slowly bringing risk into the portfolio. Even if the recovery is u-shaped, the restart will be slower than the sudden stop; you can’t just go out and open up a hotel tomorrow.”

It feels like a time for taking stock, not just of how the pieces of the puzzle will fall for emerging markets, but also how world trade will be changed following the great global lockdown. “There has been a complete rethinking of the supply chain,” says Koenigsberger. “Going forward you’ve got to rebuild supply chains for resilience not for low cost. The new normal will be really different.”

What is not likely to change, however, is the need for capital. Amid the freezing of certain industries since the early part of the year, many businesses are in desperate need of capital to get going again. This creates an opportunity for fund managers which, in emerging markets, was becoming apparent even before the covid-19 crisis.

“After the global financial crisis, emerging markets such as Peru, Colombia and Brazil brought in more solid and conservative macro policies,” says Gustavo Ferraro, partner and co-head of private credit at Gramercy. “These policies gave companies a good base to build for the future and they have been able to grow beyond their national boundaries. This has created a need for capital to help them grow. The larger companies can go to the international capital markets, but that’s not possible for the next tier down in terms of size.”

Ferraro is not concerned about opportunities in a downturn. The nature of them changes, he says, but they still exist. Some of those opportunities stem from the fact that private credit acts as an alternative to pure equity financing. “Private credit has performed very well in both up and down cycles,” he says.

“In up cycles, there are increasing sources of funding as everyone is bullish and they relax their credit standards. You have a lot of choice, but you have to narrow it down to only doing what makes sense and focus on those cases in which companies are willing to adhere to our credit principles. In down cycles there is less dealflow but, with the ones you take on, you have to have a very frank and aligned negotiation in terms of the structure. You need better and stronger protection which helps in mitigating the poor macro environment. But we’ve found companies are more willing to work with you on that in the tougher times.”

Greg Bowes is a co-founder and managing principal at Albright Capital, a Washington DC-based fund manager which, like Gramercy, has an emerging market focus. He is convinced that the opportunity set is better in emerging than developed markets, partly because what were once clear differences between them have narrowed. “The strength of legal rights has improved according to the World Bank, with the difference between high- and low-income countries cut in half since 2013,” he says. “The jurisdictions are much more dependable.”

Although he acknowledges that emerging markets have challenges, there are ways around these. “We only do friendly deals. We’re not into hostile deals where there’s antagonism with local companies and you end up hoping that the courts will assist you. That may not happen.”

“There are other techniques you can use that offer protection,” adds Bowes. “You can look for hard currency revenues and mitigate residual currency risk. Distressed investing is not really very different from in developed markets and investors can genuinely expect equity-level returns with substantial downside protection. It’s surprising that it gets so little time and attention [from investors].”

While many associate emerging markets with distressed opportunities – perhaps because they have regularly had to face currency crises – those on the ground say direct lending is a growing area that has been overlooked. “Local bank willingness to lend has diminished,” points out John Yonemoto, co-founder and chief investment officer at Albright Capital.

“When the likes of Brazil and Turkey have had economic shocks, companies have found themselves struggling to refinance bank debt, including working capital lines,” he adds. “The banks let these lines mature and don’t renew them even though the company may be healthy. If it’s a great business that can’t get working capital, that’s where we think we can have the biggest impact.”

Walid Cherif, founder and managing director of fund manager BluePeak Capital, agrees that the lack of bank lending in emerging markets has created a large financing gap. In a recent feature for Private Debt Investor, he said: “Commercial banks are notorious for their risk aversion. Prior to the covid-19 pandemic, more than 50 percent of small and medium-sized enterprises in emerging markets did not have access to appropriate financing in their market. I wonder what that number is today.”

Cherif points out that while SMEs in Africa, as an example, are estimated to contribute more than 60 percent of GDP, the finance gap is thought to be $431 billion for the 50+ million micro, small and medium-sized enterprises across the continent, according to IFC’s report on Micro, Small and Medium Enterprises published in 2017. That gap, he thinks, must be close to $1 trillion today.

Despite the scale of the opportunity, Albright’s Bowes acknowledges that emerging markets debt is an acquired taste for most LPs. “Family offices and endowments are among the investor base as they are not just asset allocators and can think opportunistically. A contrarian instinct is helpful. You’ve got to look at the real risk, not the perceived risk.”

For those that do, the rewards can be substantial. “Direct lending and mezzanine in developed markets on an unlevered basis can deliver 200-300 basis points over the liquid high yield index,” says Bowes. “In emerging markets outside Asia, the return could be three or four times that.”