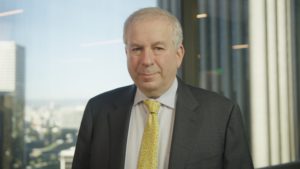 Red lights are currently flashing all over the markets and the economy, but many economists only now are coming to the realisation that we are in for a deep recession.

Not David Rosenberg, chief economist and strategist of his newly-formed Rosenberg Research. An inveterate contrarian, Rosenberg was the long-time chief economist at Merrill Lynch and at Gluskin Sheff before striking it on his own this year. At the height of the bull market in US equities in late February, Rosenberg was warning of a recession and deflation. He also called the Great Recession, and in 2005 foresaw the US housing bubble.

Private Debt Investor culled his latest views from an interview and from his daily missives this week in his newsletter “Breakfast With Dave“. “Markets are broken. Full stop,” he wrote. “This is likely to be the sharpest recession in the post-World War II era.”

After US Treasury secretary Steve Mnuchin’s remark this week that without any policy reaction to the current crisis, the jobless rate would soar to 20 percent, Rosenberg noted that the statistic was identical to that of 1932, during the Great Depression, when real GDP contracted nearly 13 percent. Indeed, JP Morgan economists this week slashed their GDP estimates to -14 percent for Q2 2020. Nevertheless, Rosenberg wrote that “nothing in the Mnuchin fiscal proposal prevents a wave of delinquencies at the business level”, and that “liquidity issues remain acute in every market”.

The economist pointed out that Monday was the seventh day in a row of a 4 percent move up or down in the S&P 500 Index, something that last happened in 1929. The VIX volatility index is at a record high, and the proposed $1.3 trillion rescue package “doubled the deficit in one fell swoop”.

The current environment represents a perfect storm of multiple shocks, never before occurring simultaneously. They include the global demand and supply shock, the oil shock, the negative wealth shock and the credit shock. Giants of the US economy such as Boeing, which employs more than 100,000 Americans and 2.5 million workers in the supply chain, is seeking a $60 billion bailout.

“We’ve never before come into the prospect of recession with corporate debt levels as high as they are,” Rosenberg said last week, noting that half of that debt is rated triple-B. “In the last cycle, the household sector was the culprit; this time it’s the corporate sector, which does most of the hiring in the economy,” he added.

“We are at risk for a bigger recession than many people are expecting,” said Rosenberg, who has been advising investors to avoid any form of leveraged loans and credit-spread strategies for months. This week, he noted that 50 percent of the high-yield bond index was trading below 80 cents on the dollar. “There will be a negative feedback loop in the economy from all the downgrades, delinquencies and defaults,” he said last week. “For the first time in recorded history, every safe haven is not behaving like a safe haven, but rather as a source of collateral to be sold for cash,” he wrote Wednesday.

Amid the destruction, Rosenberg is very bullish on long-term Treasury bonds. He wrote: “The latest backup may be the buying opportunity of the year.”